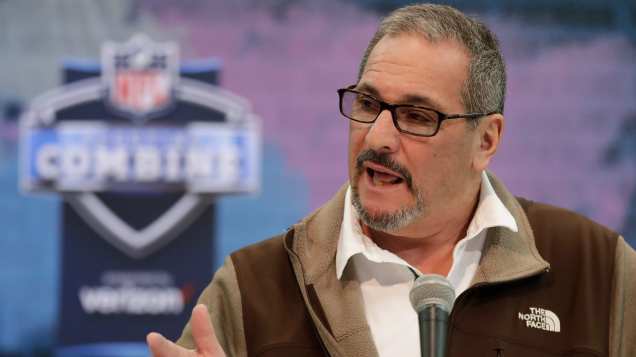 The OBJ Trade, the Golden Tate signing, and retaining Eli Manning for another year,  Gettleman  spoke with the media to discuss his head scratching decisions.

First, let us examine the OBJ trade.   According to Peter King, I believe GM Dave Gettleman thought it was a sign of desperation to reach out and try to scare up offers—that he learned under Ernie Accorsi, who played that kind of game with the Chargers in last-second Eli Manning trade during the 2004 draft. So Gettleman reached out first to only one team before dealing Beckham: Buffalo. When the Antonio Brown deal fell through, Gettleman called Bills GM Brandon Beane wondering if he was so interested in Antonio Brown, how about Beckham? Beane didn’t bite. ( Keep this in mind: Beane is a close friend.  Beane worked under Gettleman in Carolina).

So what does this tell us.  Ownership gave Gettleman  a mandate to trade OBJ.  Even though, about a year earlier,  this is the same ownership who signed him to an 18 million dollar a year contract.  This does not make sense.  But again, we are dealing with the Mara lead New York Football Giants.  To give more color on the Giants behavior,  respected NFL Fox Insider Jay Glazer:

Glazer, in my opinion, is the best in the business.  Please heed his information.  It was Giants head coach Pat Shurmur who wanted to keep OBJ around.  This explains the Giants signing Odell to the big contract.  Shurmur convinced management he could work with Odell.   As the year unfolded, this did not happen.  As Glazer reported,  it was multiple summation for sending Odell packing.

Gettleman  has been dishonest about the whole process.  He claims the whole trade was organic and painting his story about the Browns deal being to good to pass up.

Gettleman in his own words:

So, the obvious question is ‘Why?’ That’s the question that everybody has. After much discussion, we just believe this was in the best interest of the New York Football Giants. I want everybody to know that this was purely a football business decision. There’s no intrigue, there’s no he said, she said, none of that stuff. So, let’s not waste time with those types of questions after the fact. Odell was a tremendous talent, making him a valuable asset. With football being the ultimate team game — you guys know I’ve said that a number of times — with football being the ultimate team game, we turn that fact into three assets at the very least.

Translation:  Giants were tired of OBJ.  They were willing to get rid of him at any cost.  Took the Browns offer and decided to eat 16 million toward their cap.    I believe the tipping point was OBJ’s mysterious quad injury.  For whatever reason, this injury sidelined him for the remaining four games of the 2018 season.  Was he really injured or was he fed up with the coaching staff and Barkley getting all the limelight?  Notice in the last few games, he only caught 5 and 3 passes respectively.  And in the Philadelphia blown loss,  the Eagles had a decimated secondary.  Undoubtedly, OBJ is a competitor who should have gotten more passes thrown his way in the Philly game. I believe if utilized correctly would have made a difference. The frustration is palpable. Recall, Barkley only got 5 touches in the second half of said game. Needless to say,  I think it was a combination of both.  From what I know, OBJ behaved in a similar manner while he was at LSU.  So this behavior spilled into the pros with the Giants.  As I have been writing here on the NYGunderground,  Gettleman is ridding the Giants of headcases.  Apple, Harrison, Collins, Vernon,  and now OBJ have been removed from the team.

So what is upsetting is the Giants appeared to be on a path to a total rebuild, and in turn Gettleman  signs a 31 year old possession receiver Golden Tate to 23 million guaranteed. Furthermore,  decides to retain Eli Manning at 23 million for his final year of his current contract.

What did Gettleman decry to his critics?

Sounds like John Kerry from 2004.  Claiming he has a plan.  How did that work out?  Seriously,  none of the reporters on the call with Gettleman asked him the following:

What organization in the annals of professional football won and rebuilded at the same time?

At the end of the day, when you blow the whistle, 11 guys have to go out there. I’ve done that study and on offense you have to have a quarterback run out there. I said it in Indianapolis and I’ll say it again, you turn around and take a look at what happened last year once we got that o-line fixed, better, we’re going to continue working on that and look at what we did the second half of the year on offense. This narrative that Eli is overpaid and can’t play is a crock, I’m telling you. At the end of the day, you guys have to say, ‘Gettleman is out of his mind’ or ‘he knows what he’s talking about when he evaluates players.’ That’s really what it is, that’s really where it’s at and I’m okay if you disagree with me, that’s fine. What I’m telling you is if you turn around and take a look at what he’s making right now, and look around the league and see what quarterbacks are making, if you were in my shoes, you would say, you know what, there is really not — the way he finished the season and what he’s making — there really wasn’t a decision to make.

The decision to keep Eli Manning around for another year is going to be Gettleman’s folly.  He is giving fans the allusion he is rebuilding albeit keeping an aging and unproductive quarterback.  Another half measure by the New York Football Giants is going to set back the franchise further into a dark abyss.  The time was ripe to rid Manning from the Giants and start from ground zero.  Instead, we will have to endure more losing.  And this losing has become difficult to swallow.

One thought on “Gettleman Defends His “Plan””