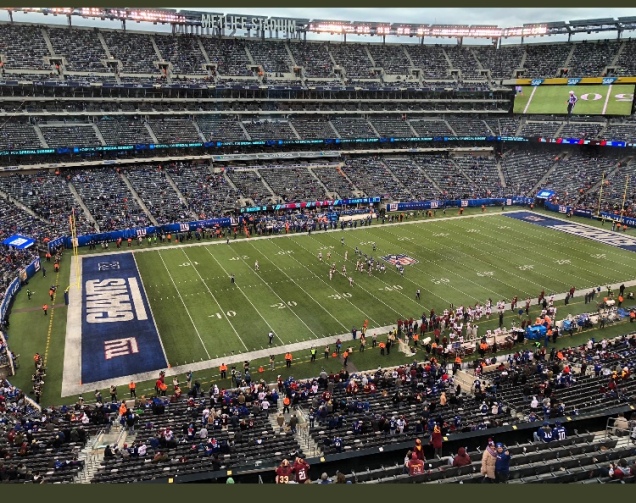 Time to blow this thing up!

So many warts popped up.  All THREE major warts stood out.  Giants offensive line allowed  Eli Manning to be sacked SEVEN times.  The defense recorded ZERO sacks.  Embattled Giants quarterback Eli Manning threw TWO crucial interceptions.  What does this mean?   Giants need to overhaul both the offensive and defensive lines.  More importantly,  make a change at quarterback.   For the third consecutive week, the Giants offense led by Eli Manning cannot score points.  13 points vs the Eagles,  12 points vs the Falcons, and 6 points vs the Redskins.  Yes, we are omitting the meaningless touchdowns versus the Falcons and Redskins.  The point is the Giants cannot get out of their own way.  Another embarrassing effort at home against a weak opponent.  With this ugly loss, the Giants fall to 1-7 overall  and 0-3 in the NFC East.  In back to back seasons, the Giants are at a dismal 1-7 record.  Last time the Giants were this hapless:  The 1970s.  1973:  1-7-1 and 1974: 2-6.  The hyped up 2018 season is over.  Time to turn the page.  2019 cannot come soon enough.   As for the game:

Eli Manning (30 for 47, 316 yards, 1TD, 2INTs , 72.6 RTG), has a career record of 18 – 9, against the Washington Redskins, which is considered one of best records Manning has against an NFL team. However, his outstanding record of the past does nothing to ease the disappointment and pain the team is experiencing as they drop their 5th straight game in a row in a crushing 20 – 13 defeat.

Attribute the Washington Redskins defense pummeling Manning with 7 sacks for 50 yards, led by (NT/DE) Matt Ioannidis (5 Total tackles, 4 solo, 2.5 sacks, 2 tackles for losses and 4QB hits) to give Big Blue their 7th loss of the season. Safety D.J. Swearinger also had a stellar performance with 2 interceptions and 3 passes defended.  In what was considered the most important play of the entire 1st half, Swearinger stepped in front of Odell Beckham Jr. (OBJ) in the red zone thereby stopping the Giants first significant attempt at scoring. The 2nd interception was a bomb chucked up for grabs by Manning on a 3rd down conversion attempt. The Washington Redskins though were unable to take advantage of the gifts provided by Big Blue due to the ‘Skins kicker, Dustin Hopkins (2/3 , Long – 53 yards) missing a 41 yard field goal attempt and an Adrian Peterson fumble recovered by Giants linebacker Olivier Vernon.

The combination of OBJ (8 REC out of 11 Targets for 136 yards, Long – 44 yards) and Saquon Barkley (9 REC for 73 yards) accounted for over 65% of the yardage thrown by Manning. With the exception of a meaningless 2 yard touchdown pass to tight end Evan Engram (5 REC, 25 yards, 1TD), Manning is now nothing more than a compiler of yardage. His touchdown passes have become more and more irrelevant as the season drolls on as the last touchdown which made an impact in a game was four weeks ago against the Carolina Panthers.

As horrific as Big Blue’s offense was, the Washington Redskins did not exactly bring their “A” game today either. Alex Smith (20 for 32, 178 yards, 1 TD, RTG – 87.8) had a worse average per pass play (5.6) than Manning (6.7). Smith longest pass play was only for 25 yards as their leading receivers, (WR) Josh Doctson (5 REC for 49 yards) and (TE) Jordan Reed (7REC 38), failed to crack 50 yards. Basically, the ‘Skins offense consisted of the Adrian Peterson (26 ATT for 149 yards, 1TD)show scoring a 7 yard touchdown pass in their initial scoring drive and closing the door to the Giants playoff hopes with a late, 4th quarter, 64 yard sprint into the end zone.

Mistakes were plenty on both NFC East teams though with both teams failing to have a good 3rd down conversion record (NYG – 2 for 14 & the ‘Skins 6 for 15) In an ironic twist of football cruelty, the Giants actually had more 4th down conversions (3 for 4) in the game. Penalties by the Giants (11 for 102 yards) and ‘Skins (8 plays for 90 yards) disrupted the teams progress in stopping the opposing offensive drives as well. The most damaging penalty for the Giants was a running into the kicker penalty, midway through the 4th quarter, by undrafted linebacker Tae Davis, which cost them to lose an extra 1:07 and time out that they could have used in the Giants failed attempt at a comeback. On the play resulting in a Giants field goal of 21 yards by Aldrick Rosas, 50 yards in that Big Blue drive cam from defensive pass interference calls.

The Giants enter the BYE Week on historically cataclysmic lows of a
4 – 20 record in the last 24 games and a 1 -17 record against NFC East opponents. Based on the lack of success this team has had in the past 2 seasons, the time for a quarterback change may certainly be at hand.

Giants committed 11 penalties for 102 yards.  This is on head coach Pat Shurmur.  Over 100 yards in penalties is indicative of an undisciplined team.

The team did no quit.  Give credit to Shurmur.  The score at the half was 7-3.   Giants trailed 13-6 in the second half.  Yes, they lost but it was not like the Rams game of a year ago.

Giants are NEGATIVE in the turnover ratio.  Only game they won the turnover battle was against Houston.  This happenes to be their only win.

Yes defense allowed Washington to rush for 182 yards.  The Giants defense came to play.  Even without Snacks Harrison and Eli Apple, the Giants defense did not miss a beat.  Last week,  I tweeted Snacks was a locker room problem  Some followers took umbrage with my comment.  I will use my space here to elaborate.  Because Landon Collins broadcasted his displeasure with Eli Apple’s behavior.  This gave Giants beat writers a cue to write about Apple.  An unwritten rule in covering a team is not to tell outsiders what goes on in a locker room.   So we knew about Apple.  As for Snacks,  there are stories which have been reported. 1.  After Bobby Hart was cut,  Harrison had to be restrained from coming to blows with Hart.  2. Snacks refusing to talk to the media.  Oh, is it big deal?  It is a big deal when he is supposed to make himself available to talk with the press.  This continued this year.  This is the stuff which has been reported.  I can only imagine the stuff not reported.  In due time, we will find out how Snacks was a poison in the Giants locker room. It is my belief, the Giants got tired of his nonsense and gave him away for a 5th round draft pick.  When he got here, he solidifed the Giants defensive line.  They were 3rd in the in NFL against the rush in 2016.  In 2017, with his teammate DT Jonathan Hankins departing via free agency,  the Giants finished 27th versus the rush.  Prior to this game and Snacks’ departure,  the Giants were 20th vs the rush.  So for a guy who played 50 percent of the time, it was time to send him packing.

Eli Manning:  After today’s game he was quoted on wanting to stay on the Giants.  This is what he is saying publicly.  Privately,  it is another story.   It is in the best interests of the Giants and Eli Manning to part ways.  Waive your no trade clause and move on.

Landon Collins:  As of this writing,  Collins name has surfaced in a possible trade.  Who is floating this?  The Giants front office.  Look for Collins to get traded by the deadline.

The Giants Have Turned the Corner